Two years after leaving the EU, we have all kinds of reasons to celebrate our newfound freedoms. We are doing great things. We regained control of our money, our borders and our laws. We have over 60 free trade agreements.

We are out of the Common Agricultural Policy and the Common Fisheries Policy, and out of all the vexations and delays of EU procurement rules. We deliver free ports.

We are also carrying out a multitude of relatively minor reforms. We have reduced VAT on stamps. We are reducing air passenger rights on flights within the UK.

We are finally able to repeal the infamous Vnuk judgment of the European Court of Justice, so you don’t have to pay so much to insure a motorized lawnmower or motorized wheelchair.

We can pass our own animal cruelty laws and we’ve brought back blue passports and crown stamps on pint glasses.

And then there’s one thing we were able to do that has immediate and far-reaching consequences.

Look around you. There are people without masks, tourists returning to Britain and people going about their business in the G7’s fastest growing economy.

We have more employed people – around 420,000 – today than when the pandemic started. Youth unemployment is at historically low levels.

When I went out with the dog to Checkers for my morning run, I saw the contrails of eight or nine planes over Buckinghamshire – all at once. You haven’t seen this during lockdown.

The UK is emerging from Covid faster than virtually any other European country.

And that was at least partly because of Brexit. We were only able to do this because we chose to forge our own path as an independent UK.

We opted to source our own vaccines rather than enroll in the slower EU programme. And we have chosen to fast track the licensing of these vaccines through our own Medicines and Health Products Regulatory Agency rather than waiting for the European Medicines Agency. 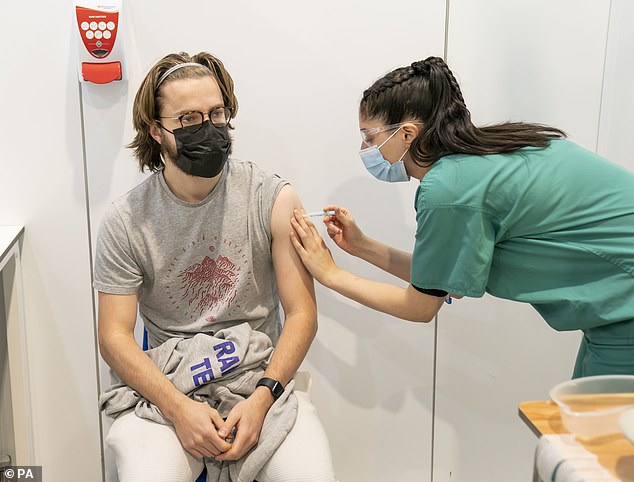 Pictured: Simran Saughall (right) administers a booster shot to Adam Hamilton (left) at a vaccination center in Leeds, as the booster vaccination program continues across the UK

It’s no secret that not everyone in the EU has been absolutely thrilled with the UK’s rapid progress. I seem to remember that there were unfavorable (and totally unjustified) comments about the effectiveness of the British AstraZeneca vaccine.

It was such a shame, as the AstraZeneca jab was distributed, at cost, to an estimated 2.5 billion people worldwide. The vaccine invented by Oxford probably saved millions of lives.

I also remember an unedifying argument about five million doses of vaccine languishing in a factory in the Netherlands, even though the UK had paid for them.

All of that squabbling is now behind us, and the key lesson is that at the end of the day it’s impossible to hold the UK back, and impossible to stop it enjoying our newfound freedoms – and we’ll always go faster .

Our new Brexit Liberties Bill will facilitate the elimination of Retained EU Law, the strange system by which EU law occupies a semi-sacred place in UK law.

We will move forward with an independent approach. In all the new technology areas where the UK excels, in data, cyber and artificial intelligence and a huge range of other areas, as reported today.

We will continue to campaign for free trade and open markets.

And have no doubt that this epic project is also in the interest of the EU. In this case, I think that the Brussels machine will increasingly benefit from the stimulus of regulatory competition from the United Kingdom.

But there is an even more important point. The UK is in many ways the EU’s largest trading partner.

We have the largest banking and financial center in this time zone where so many European companies raise the capital they need. We are die-hard admirers and consumers of their goods and services.

And at a time of great uncertainty and peril, with 100,000 Russian troops threatening Ukraine, it’s worth remembering that the UK is the second largest contributor to NATO.

Today, we stand alongside our European friends and allies. We are leading the work of preparing the right set of sanctions – severe enough to deter President Putin from what we all know will be a disastrous incursion into Ukraine.

Together with the United States and Lithuania, we are one of the few countries that have taken the decision to supply Ukraine with part of the – purely defensive – armament that the Ukrainians need.

From 2016, when I became foreign minister, I made it clear that this country might have left the EU – but we definitely did not leave Europe.

What do EU countries really want or need? They need a strong, prosperous and prosperous UK.

This is what Brexit helps to deliver in all sorts of ways.

This rapid deployment of the vaccine in the UK was not bad for the EU. It was good, because none of us are safe until everyone else is safe.

And what drives prosperity and recovery in the UK will lead to recovery in the rest of Europe. It is this spirit of cooperation – which brings us together around Ukraine – that we need now, as we urgently tackle the issue of the Northern Ireland Protocol.

We can find a solution that respects the EU single market and the sovereign and territorial integrity of the UK single market – and also meets the need for balance under the Belfast Agreement (from Friday Holy).

Now is the time for all of the West to come together – not to bicker over essentially theological disputes. The only person who benefits from this is Putin.

It’s time to put aside old divisions. Two years later, it is time to abandon the punitive, zero-sum approach.

And as we develop this post-Brexit freedom agenda, it will be great for Britain and good for the whole of Europe.